Over the last year a wave of cycling infrastructure changes were deployed across Luxembourg City. It has mostly been paint on the roads designating space for cyclists rather than breaking any ground. One of the few interesting exceptions is the new M-Box at the train station allowing cyclists added safety in locking up their bicycles for longer durations. It has also been a busy year for the promotion of cycling with Mikael Colville-Andersen visiting twice to advise how to achieve an effective cycling infrastructure and an urban cycling lifestyle. In summary, over the last year there’s been a lot of talk and some paint put on the road.

I have had positive experiences with a few of the changes. In Gare on Rue Charles VI a cycle lane going the opposite direction of the one way street (contraflow) is faster and calmer than the alternative Avenue Charles de Gaulle. Heading back from the post office I appreciate the sidewalk onramp when getting on the bridge going over the train tracks to the south of the station, it allows easy access to the planned sidewalk bicycle path. A lot of these easy simple changes are actually very helpful.

Cyclists are ‘fit’ into existing sidewalks where sign posts and pedestrians abound. A cycle track not designed for cyclists. Cyclists are being assigned to existing paths and space.

The problem is that changes are few and generally not executed with Mikael Colville-Andersen’s recommendations of prioritizing bicycles ahead of cars rather than trying to fit them in the existing street design. Returning to my example of Rue Charles VI, the yield space for the cycle lane next to Rue Bender is consistently being rolled over by cars as I approach it, the contraflow bicycle lane is not continuous (as is the case in all contraflow lanes in Luxembourg) causing automobilists to grudgingly yield a portion of the street to me as they have forgotten that I am allowed to be there. Bicycle lanes are placed through signs or directly in front of bus stops. The best example of squishing cycle infrastructure into existing spaces is Avenue de la Liberté. The plan was to create a designated cycle track on the sidewalk, this was implemented but didn’t last long before a portion of it was converted to a shared pedestrian and bicycle space. This is a bit of a disaster as it’s a busy pedestrian area and cyclists will only be viewed as obnoxious (as they are already viewed on the road). 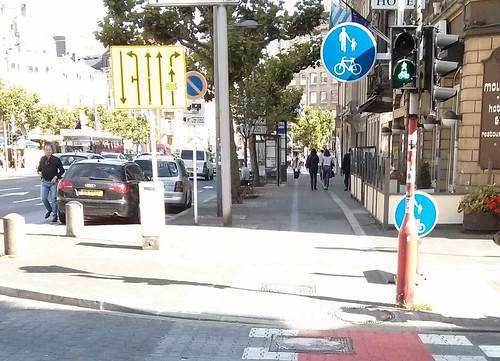 The plan on paper looked dubious already. The sidewalk was too narrow for a cycle track and was removed on the busiest and narrowest portion of Avenue de la Liberté. Notice the black paint covering the white bicycle track lines.

What these changes amount to really are just a few more lines on a map representing theoretical cycling access. These lines may even start to connect on a map but the reality at the local, cyclist scale, is a bunch of fragmented compromises to fit bicycles into our urban space. Renown architect Jan Ghel speaks of how buildings are designed to make nice models or look appealing from a helicopter but completely fail at the human scale. Our new bicycle infrastructure may look a little more impressive on a map but in reality it’s of little consequence. Jan Ghel names the tendency of architects to plop their projects throughout a city without considering human scale Bird Shit Architecture. With this in mind I think we can clearly state that Luxembourg is experiencing an abundance of what I would like to coin Bird Shit Bicycle Infrastructure.

There are champions pushing for more bicycle infrastructure working within the city and state of Luxembourg but they are powerless to the politicians’ wills. As Peter Cox states in his book Moving People “Change takes bravery and bold leadership at individual and institutional levels.” (p. 216) It’s much easier to increase the amount of parking under the Royal Hamilius than develop proper cycling infrastructure between Gare and Hamilius. Never mind the added congestion and emissions the new parking spaces will bring to the city centre. 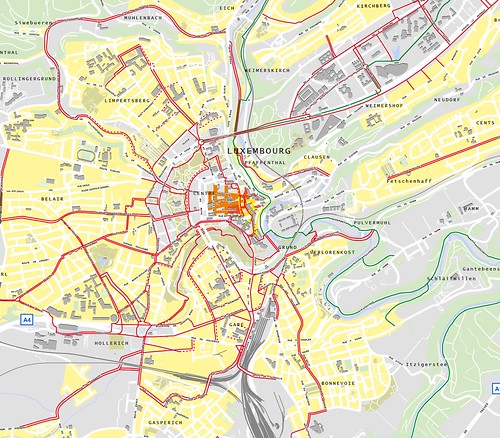 This map is something a politician can be proud of, unlike the actual infrastructure on the ground.

Following Mikael Colville-Andersen’s presentation on May 14, 2014 encouraging a cycling centred urban design, the discussion rapidly turned to how hard it is to fit cycling in Luxembourg due to the narrow streets, car culture and the steep hills of Luxembourg. The whole talk had focused on everything wrong with driving and the benefits of cycling and how to develop cycling but the conversation came right back to fitting in cycling. The talk was good but the message ignored.

Luxembourg City is making a few easy additions to its bird shit bicycle infrastructure, mostly just putting paint on the ground. Considering how easy and cheap it is to put paint on the ground it’s insulting how little has been done to protect cyclists by simply painting more proper bicycle lanes. Let’s disregard the fact that putting bicycle lanes between parked cars and moving cars is already behind the times and that bicycle lanes should be between the side-walk and parked cars. Luxembourg City’s decision makers need to show the tiniest amount of initiative and develop at least some basic bike lanes at a much larger scale and faster pace.

Bicycling has economical, social, and environmental benefits, cars many drawbacks. All it takes is a little bit of political will to make Luxembourg City a happier thriving place. We can continue to make little fragmented changes, plopping paint on the ground like a pigeon and invite popular cycling advocates but if we then do nothing of actual consequence we should get used to being mocked by the people we have asked for advice and then ignored. 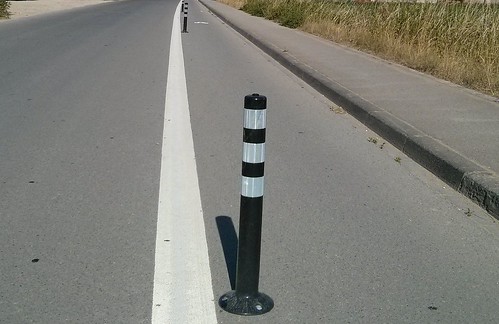 A one way street with easily enough room for two car lanes. The contraflow bicycle lane is unnecessarily narrow by the bollard placement. Placing the bollards to the left of the white line with an additional line to their left would be best for all.