Bettembourg and Leudelange, municipalities a few kilometres away to the south and south east of Luxembourg City respectively, may eventually join the above list using the same technology as BE Bike. Dudelange’s system, Cycle Diddeleng, which opened in 2009 has closed due to lack of users.

Luxembourg is currently using five different BSS technologies. The excitement of bicycle sharing has been a global phenomena since Paris’ vélib’ launch in 2007. The health, congestion, equity and environmental benefits, among others, that BSS support and promote are tempting features that can attract municipalities to deploy such a system locally. The benefits of BSS depend on it being used sufficiently or converting commuters to use their private bicycles.

Bicycle sharing systems (BSS) are typically developed to provide an additional form of public transport. They complement nicely existing bus and rail service by enabling access to areas not served by these services with trivial costs relative to car, tram and bus infrastructure. BSS also provide resilience to public transport. If you are in a hurry or your bus appears late you can always take a bicycle. It is extremely handy later in the evenings or Sundays when bus service is minimal and you find yourself at the other side of town. Daily and weekly subscriptions are also practical if you have guests visiting from out of town and would like to be able to cycle into town together. Moving about town during the lunch break is most effective using a BSS, there is no need to search for a place to lock your bike and no fear of theft either. With a subscription you can typically use the bicycles as many times as you would like for a duration not exceeding 30 minutes without paying additional costs. Many people who have not used a BSS are skeptical of its purpose, bicycle owners especially, however consider that most BSS subscribers own a personal bicycle. BSS can be viewed as an urban transport lubricant, making moving around the city faster, easier and of course more enjoyable. Luxembourg City’s vél’oh! bicycle sharing system (BSS), the largest by far with about 73 stations, was deployed in March 2008. Developed and maintained by JCDecaux, advertisements covered the majority of the infrastructure investment and day to day service costs. New stations, depending on the location and advertising desirability, were provided for free by JCDecaux or paid for by the municipality. This contrasts with Bertrange who paid for the complete infrastructure cost and maintenance/service for its BSS from Goedert S.A. using bicycles purchased from a Swiss manufacturer. In this article Bertrange’s Mayor, Frank Colabianchi, stated that the cost of a BE Bike station including pedelec bikes was cheaper than purchasing a station and set of regular bicycles from JCDecaux. We will not explore why this may be the case at this time. 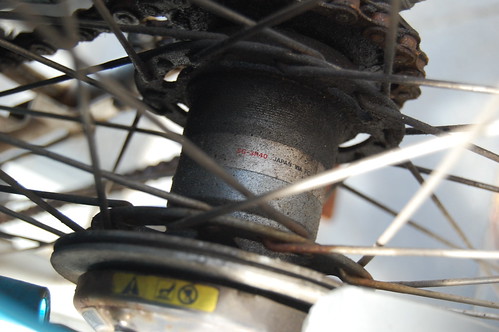 It seems that each BSS in Luxemourg has some weakness. Ignoring the debate about whether regular or pedelecs are better, the system provided by Goedert S.A. has a distinct advantages over Luxembourg city, simple usability. Checking out a bicycle from JCDecaux’s vél’oh! system takes at least 40 to 60 seconds as you need to log in to the terminal and select your desired operation and bicycle number. BE Bike’s system only takes a few seconds. You walk up to the bike you wish to use and press your card against the reader – done. This may seem trivial but most of the rides in Luxembourg are across small distances and last only a few minutes, spending an additional minute pressing buttons breaks the flow and sometimes means it isn’t even worth getting a bicycle (We will ignore the many times that trying to checkout a bicycle causes the vél’oh! station to become out of service). Remember earlier how we referred to BSS as a lubricant, making public transport easier, making you flow. What’s unfortunate is that while Paris has a similar system to Luxembourg City’s, vélib bicycles can be checked out with the same ease as Goedart S.A.’s system.

Goedart’s system in Bertrange isn’t perfect either as it seems to be experiencing technical limitations preventing it from increasing the number of stations. 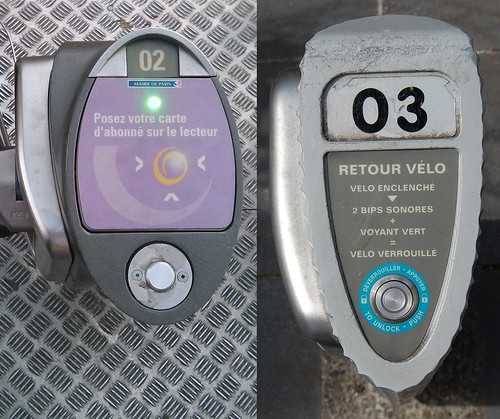 vél’oh! is Luxembourg’s largest and most used BSS. The enormous advantage of vél’oh! is the number of stations. The more stations there are the more destinations you have and the more people have access to the system. BSS require larger numbers of stations located as close as possible to areas of higher density demand points (shops, services, bus/train stations, homes). If you wanted to compare two BSS in terms of potential I suggest you count the number of stations and square the value. This gives vél’oh! a BSS potential value of 4900 to BE Bike’s 25. This of course all depends on the effective placement of stations. Something that is questionable for many of the BSS stations on the map that started this discussion. 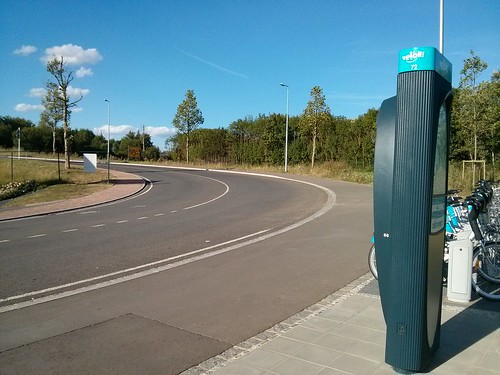 Looking at network structure in Nordstad’s system we see two pairs of stations 3.5 kilometres apart. This again will yield few benefits. Initial plans called for stations in Ettelbruck, Diekirch, Schieren, Colmar-Berg and Bettendorf but the Nordstad system is experiencing financing problems due to a project partner pulling out and causing a loss of matching funding by an external source.

If you walk around Dudelange you may notice some empty stations. Their system was closed down due to lack of users. This may be the first domino.

For Vël’Ok, and all other BSS except vél’oh!, there is currently no way to know how many bicycles or spaces exist at each station. I will exclude the Vël’Ok info page as it seriously lack usability. This information needs to be on a dynamic map. While vél’oh! has its mediocre map there also exist phone and web apps showing this information.

The importance of having a station information system is that it prevents you from finding yourself walking to a station only to discover that there is no bicycles available or alternatively, cycling to a station and finding that there is no space to dock/lock your bike. This is typically why stations are placed in the 300-400m range of one another – to reduce the inconvenience should it occur. Most systems in Luxembourg fail to achieve this density and proximity of stations.

The free duration of use is also limited for all these BSS as is the case for vél’oh!. Bertrange’s system has a limit of one hour with one euro for each hour beyond this time while Vël’Ok is limited to 30 minutes just as the vél’oh! BSS.

Currently, and ignoring refundable deposits, Luxembourg city seems to be the only BSS that is not free (as of April 2014). However, at a yearly cost of 15 euros a year and weekly subscriptions for one euro it can almost be considered as such. Bertrange and Nordstad (Ettelbruck/Diekirch) have pedelecs (bicycles with electrical assistance motors) while Esch-sur-Alzette, Mamer and vél’oh! use conventional bikes. Bertrange plans to offer a similar pricing as vél’oh! eventually. The free nature of these systems is temporary until use/popularity picks up and the distribution of stations increases. The BE Bike (Bertrange) Terms of use document states that the system is free during the start up period until March 15, 2013. It has apparently been extended.

Luxembourg City’s BSS system has expanded into Bertrange and Hesperange. Interestingly, Bertrange decided last year (2013) to develop the BE Bike pedelec BSS in addition to its vél’oh! system. The adoption of non compatible BSS schemes in adjacent municipalities is unfortunate as the strength of a BSS relies, as described earlier, on its network size. While the artificially high cost of JCDecaux’s infrastructure makes alternative BSS appealing, fragmentation is inefficient. Not having a website displaying the number of bikes and docks available, as is the case for all BSS but vél’oh! is also unfortunate as this is a minute fraction of the total BSS cost but extremely important for usability. Without such a system the bicycles somehow don’t seem real.

In the realm of the possible two things could happen in the shorter term that would improve the efficiency and success of BSS in Luxembourg. The vël’Ok system could easily provide a better information system online. A few members from Luxembourg’s hacker space would surely assist for free in doing this if needed. The second is the renegotiating of Luxembourg’s contract with JCDecaux and the splitting of the large revenue from advertising. In 2018, with the end of the vél’oh! contract, Luxembourg City should push for the division of the existing contract into two new contracts. One contract for advertising billboards and another for BSS services. The first would provide revenue and the second would be a cost. This would help improve transparency regarding advertising profits and BSS costs. The new funds could finance the expansion of the vél’oh! system into many more of Luxembourg’s municipalities or be used for the selection of a new BSS provider that respects market prices.

A more dramatic change would consist of developing a national BSS network – just as the existing train, bus and road networks. This would have several important benefits. Many bicycle sharing users only use the system to complete the last leg of their journey home or to work. Having the system available in your home and work municipality, with a potential train or bus ride in between, would allow a more seamless commute. Using the same pass for bus, rail and bicycle sharing is already done in multiple cities in France and perfectly achieves the flow we need and desire when moving through our cities. Flow allows brings simplicity to a commute while cycling reduces congestion, C02 and increases health and productivity.

Luxembourg has experienced six BSS. I suspect most people are aware of one or perhaps two of these systems. Only Luxembourg City and Esch-sur-Alzette’s systems are of sufficient size to be flexible and only Luxembourg City has a helpful information system showing the real-time location of bicycles. The remaining systems have either shut down or are experiencing funding or technical difficulties.

BSS provide an important and cost-efficient niche role in our urban mobility. Importantly they suggest the idea of cycling and provide a low barrier to trying cycling for the first time or again after many years. They can satisfy all the health, equity and sustainability objectives but they must be given the proper supporting infrastructure. Cycling requires feeling and being safe. One of the highest ambitions for a BSS is conversion, to make someone who doesn’t commute by bicycle, try bicycle sharing and decide to invest in their own happiness and health by purchasing a private bicycle. However, if their first ride on a BSS bicycle is difficult or causes them to fear for their safety, when will they try urban cycling again?